New methods for fast analysis of particulate materials Fast analysis of particulate materials represents one of the most challenging issues at the forefront of current analytical chemistry. The ability to rapidly analyze particulate materials, including aerosols, hydrosols and soils, may have far-reaching consequences and impact on the environmental sciences, on industrial process control, and on human health. Although analysis of particulate materials has been a long desired goal, it could not be achieved satisfactorily by most of the previously known methods. It is therefore necessary to develop novel strategies and methodological approaches for solving intrinsic problems. The new methods recently developed by Schechter’s group for this specific purpose include Fourier Transform (FT) Chemical Imaging, Modified Laser Induced Breakdown Spectroscopy, Laser Multiphoton Ionization, Laser Induced Fluorescence and Cavity Ringdown Spectroscopy. The Schechter group at the Technion has been studying these approaches as well as their combinations for specific tasks. Furthermore, they have also developed analytical sampling methods that are suitable for particulate materials, and methods for sophisticated chemometric data analysis.

A new analytical technology for sensitive detection of compounds under ambient conditions has been developed. It is based on a new kind of spectroscopy, named MEES (Multiphoton Electron Extraction Spectroscopy. In this method the sample is irradiated by a laser and the photocurrents are measured as a function of excitation wavelength. The samples can be in solid phase (including crystals, films and powders), in liquid phase (including pure liquids and solutions) and in the gas phase (including pure gases, mixtures and aerosols). MEES spectra are more featured than those obtained by traditional absorption or emission techniques.
An automated MEES spectrometer has been constructed. It is equipped with a setup for scanning of surfaces and obtaining MEES spectra. Spectra of many compounds have been measured for the first time, including polycyclic aromatic hydrocarbons (PAHs), explosives, pesticides and drugs. The performance of this technology has been evaluated for trace detection of explosives and other compounds. In the scanning mode, MEES can be used for looking for a specific compound on a surface. In this mode, the LOD for TNT was 80 pg. The results indicate that MEES spectroscopy is very sensitive.
MEES has been compared to other spectroscopies, such as UV-VIS absorption, reflection and emission, Raman, FT-IR and FT-NIR. In general, when thin films and powders on many compounds were analysed, the signal-to-noise ratios of MEES were higher than those obtained by other spectral methods. In all studied cases, the MEES limits of detections (LODs) were better than those obtained using the other traditional spectroscopies. It seems that MEES is a new promising analytical technology, which is very sensitive and informative (in comparison to alternative spectroscopies) and has many possible applications.

Fast analysis of particulate materials represents one of the most challenging issues at the forefront of current analytical chemistry. The ability to rapidly analyze particulate materials, including aerosols, hydrosols and soils, may have far-reaching consequences and impact on the environmental sciences, on industrial process control, and on human health.
Although analysis of particulate materials has been a long desired goal, it could not be achieved satisfactorily by most of the previously known methods. It was therefore necessary to develop novel strategies and methodological approaches for solving intrinsic problems. The new methods recently developed by Schechter’s group for this specific purpose include Fourier Transform (FT) Chemical Imaging, Modified Laser Induced Breakdown Spectroscopy, Laser Multiphoton Ionization, Laser Induced Fluorescence and Cavity Ringdown Spectroscopy. The Schechter group at the Technion has been studying and refining these approaches as well as their combinations for specific tasks. Furthermore, they have also developed analytical sampling methods that are suitable for particulate materials, and methods for sophisticated chemometric data analysis. Thus, Prof. Schechter has been attacking the intricate problems of particulate materials in a comprehensive manner, offering a broad spectrum of new methods for all three phases of the analytical process – sampling, analysis, and data processing. The following summary highlights the most significant achievements of the past 5 years, since Schechter’s last promotion.

Chemical imaging is a new and powerful tool that precisely maps chemical constituents in a sample by combining traditional analytical spectroscopy with twodimensional visualization. Simultaneous spectroscopy at each point in the sample provides information on chemical composition with spatial resolution. Several new devices have been constructed for obtaining chemical imaging and their applications to analytical studies.
For example, the FT-chemical imaging technique was coupled with fluorescence microscopy and provided, for the first time, chemical and morphological information on aerosols and other particulate samples. This method was patented. This is now the only available method that allows for such combined data at such a large optical throughput. Detection limits (for some contaminants) were in the pg range. Furthermore, a detailed analytical investigation on particulate polycyclic aromatic hydrocarbons was carried out, providing, for the first time, spectral imaging data on micro-crystallites. The kinetic data were analyzed in order to achieve better understanding of the dynamics and the photochemical processes involved. The newly developed chemical imaging methods were also applied to breakdown spectroscopy (for understanding the spatial distribution of elements in the plasma) and for medical applications, such as the examination of oral tissues, tooth caries and dental fluorosis.
The LIF method was applied for the first time for quantitative analysis of pollutants in water suspensions. In this case, application of chemical imaging to LIF analysis of water suspensions resulted in understanding the various effects involved and for their modeling. As a result, it is now possible to analyze water pollutants in the presence of persistent particulates of various optical characteristics.

Time resolved laser induced plasma spectroscopy is a direct method for particulate analysis. It provides fast and simultaneous information on many elements of interest. For example, spectral-morphological information was elucidated and utilized for chemical analysis. This was achieved by a special setup, which allowed for simultaneous time-resolved spectral analysis at many locations in the plasma. The spectral data was at a very high resolution. This method was patented. Furthermore, the plasma dynamics was studied, providing insight into the matrix effects associated with laser plasma spectroscopy.
In addition, a method for compensating for the matrix effects by calculating the laser energy coupled into the sample was proposed. The latter was obtained from plasma dynamic calculations, based on time-resolved morphological information. Understanding the plasma dynamics has led to the development of a modified LIBS setup, which takes into account the morphological information. Moreover, laser induced breakdown spectroscopy coupled with imaging laser ringdown analysis was achieved for the first time by varying the relative location of the breakdown plume and the ringdown beam. This combination provides a new analytical dimension, as well as interesting physical insight to the sampling dynamics. This hybrid method provides a unique tool for studying the expansion of material in laser ablation processes. Such data is required for many related analytical techniques, such as laserablation MS.
More detailed 3D information on laser ablation processes was obtained by another method, which we called “Secondary LIBS”. Two consecutive laser pulses were applied, one for the induction of the primary breakdown and the associated aerosol plume, and the second for studying the mass concentration and composition at various locations in the space above the sample. This is the only known technique that provides temporally and spatially resolved (3D) data on the materials in breakdown plumes.

In this method a laser pulse in entrapped in a cavity and applied for sensitive analysis of gases. The cavity ringdown technique was applied, for the first time, for aerosol detection. The results were used for estimating aerosol extinction coefficients as a function of size, shape and index of refraction. This method has the potential of becoming the most sensitive analytical technique for aerosols and airborne nanoparticulates. In addition, it was shown for the first time that absolute number densities of airborne particulates at very low concentrations could be obtained from ringdown fluctuation analysis.
In addition to environmental applications, laser ablation processes by the cavity ringdown techniques have been studied. Laser ablation is used in many analytical methods and industrial processes (e.g., CVD), however, the nature of the laser sampling process has never been well understood. By applying the cavity ringdown technique, information on the spatial and chemical distribution of the ablated particulates was provided for the first time.

Laser Multiphoton Ionization – Fast Conductance (MPI-FC) technique, performed under ambient conditions, was introduced as a new method for environmental analysis. Low limits of detection, at the level of environmental regulations, were achieved. Most relevant matrices, such as soils, plants, liquids and aerosols were addressed. Various new sampling methods were developed, such that on-line detection could be performed. A proper coupling of this method with laser induced fluorescence (LIF) was successful in handling complicated mixtures. Thus, the analytical benefits of a multi-dimensional data processing, based on time-resolved LIF and MPI, have been shown for the first time.
In addition to the ambient applications, another MPI method was developed, operating at reduced air pressure. This method was the basis of a new sniffer for organic pollutants in air. In this new approach, the time resolved voltage induced by MPI charges was monitored and converted into analytical information. Actually, this was the first introduction of MPI induced time resolved voltage in analytical chemistry.

An optical detector for organic pollution was developed on the basis of sampling by a polymeric film, followed by optical analysis. This detector provides direct sampling of particulate pollutants, such as aerosols and hydrosols, as well as other airborne or dissolved compounds. The related sampling processes were investigated. Of special interest was monitoring the process of dissolution of PAHs by the film. Surprising results were obtained for the possibility of analysis of contaminated bioaerosols, a notoriously known difficult task. The detector was considerably efficient in sampling of water pollutants under difficult analytical conditions. For example, it succeeded in fast analysis of organic pollutants in water, in the presence of clays and humic substances. A possible application was suggested in the form of a personal badge for monitoring exposure to hazardous gases and particulates. This method was patented. Furthermore, shortening the sampling time by such polymeric films was achieved by applying electrical fields. A considerable improvement has been achieved by a combination of electrostatic effects and current drifts. The method was found to be effective also for the treatment of ancient parchments.
חברי קבוצת המחקר
גלריית תמונות 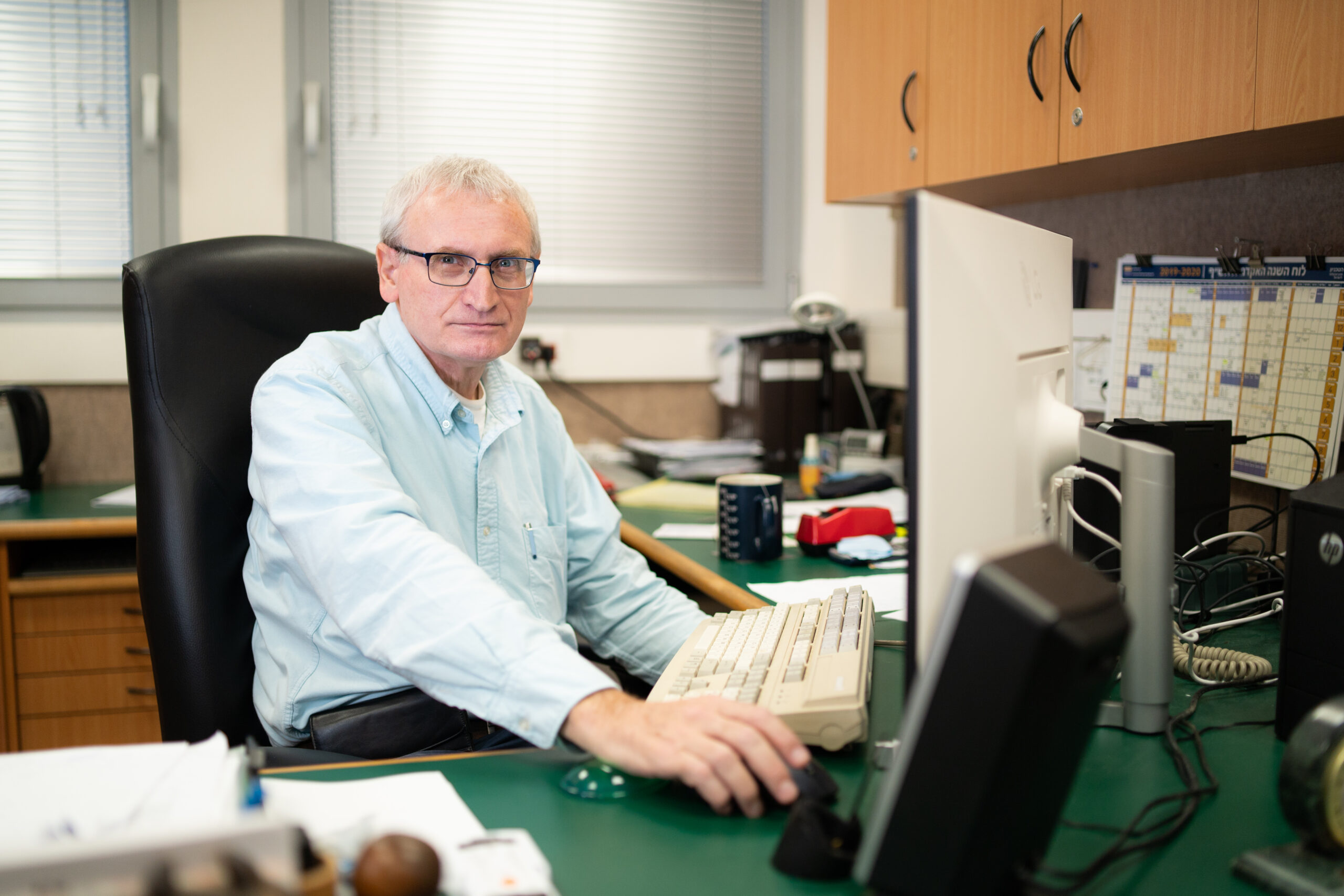 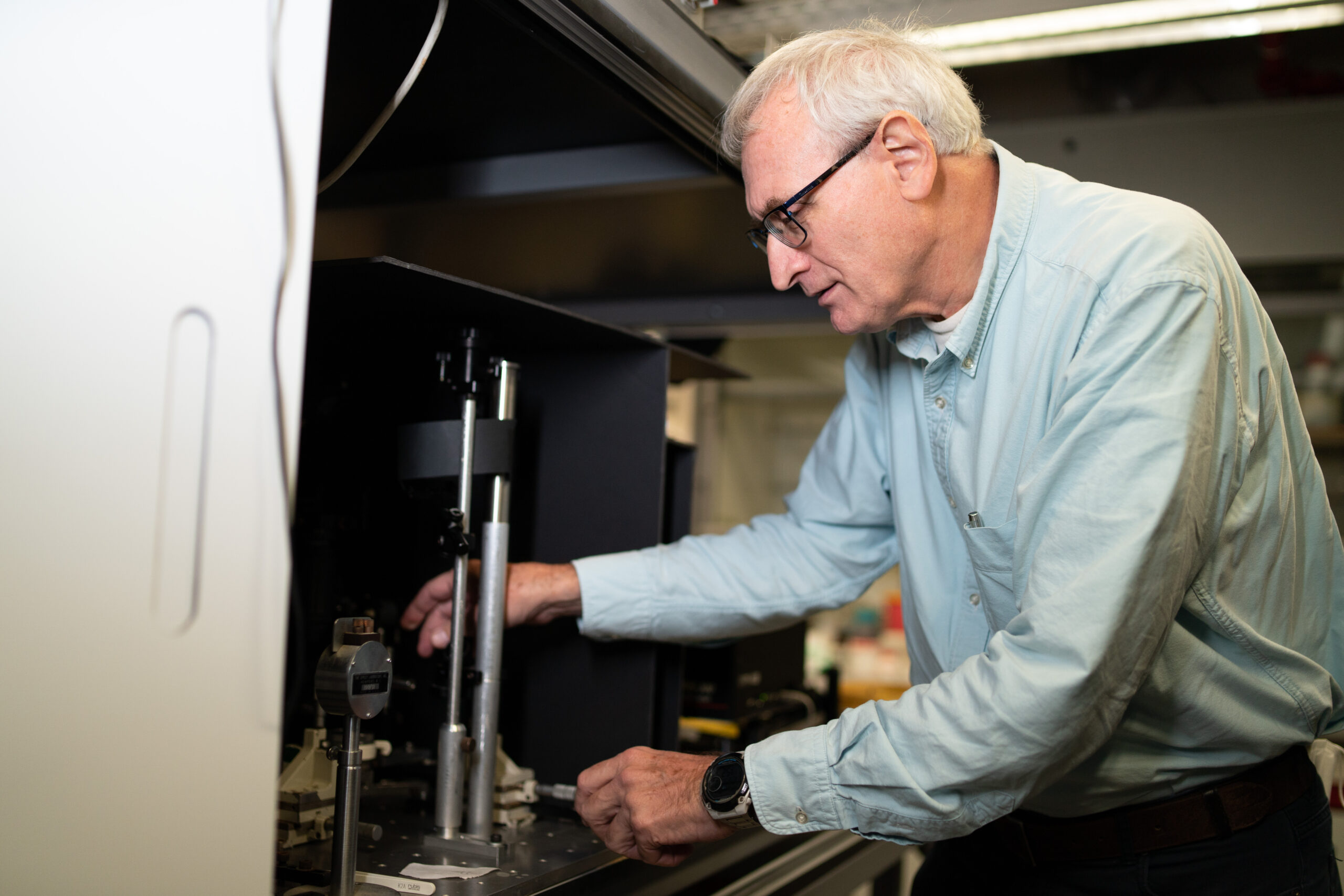 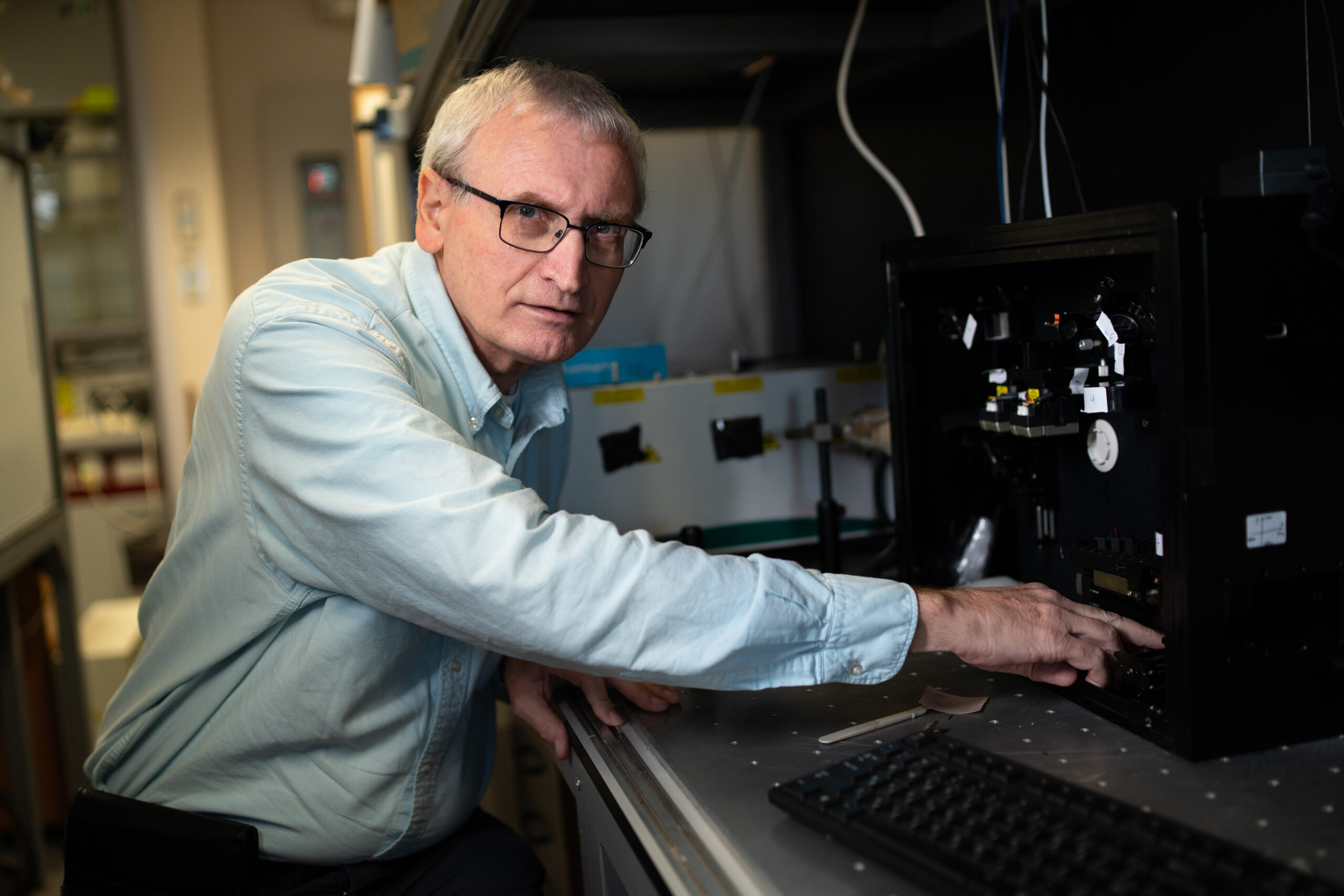