How do charges move through molecular systems? This question gains much attention due to the abundance of charge transfer and charge transport processes in natural molecular systems (such as photosynthetic centers, the vision unit, and more), and due to the anticipation that molecular electronic devices could perform much faster and with higher efficiency in comparison to state of the art technology.

Our theoretical research on the effects of molecular bridges on charge transport rate and direction aims to provide fundamental understanding of these processes and new guidelines for the control of transport through molecular bridges by an educated design of their chemical structure. Classical mechanics and kinetic theories are not valid for even a qualitative description of these processes on the nano-scale. Instead, the transport is controlled by quantum tunneling, interferences and coherent wave packet evolution, where resonance conditions derived from the discrete energy levels structure of molecules, play a crucial role.

Our theoretical strategy for characterizing these quantum transport processes is based on introducing and solving models which capture the important physics of the system, where the dynamics can be calculated exactly or using controlled approximations. This approach enabled us to provide qualitative guiding lines for controlling the transport rate or direction by modifications in the structure or the chemical composition of the molecular quantum wires. Given the complexity of a quantum mechanical treatment of the electronic and nuclear degrees of freedoms in a molecule embedded in its microscopic environment, our approach which is based on tractable physical models and propositions of generic experiments (see below) is an attractive alternative to multi-parameter computer simulations. The latter are based on very detailed atomic scale description but often involve uncontrolled approximations with respect to the quantum structure and dynamics. Some of our recent predictions for new phenomena associated with electron transport through molecular wires are highlighted below: 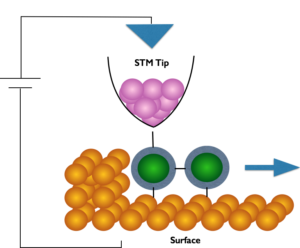 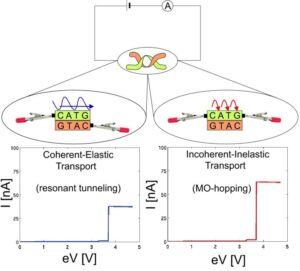 Nano-catalysis: We recently pioneered the study of voltage-selective vibrational excitation and chemical reactions in single molecule junctions. We have shown theoretically that the direction of the applied voltage can direct energy selectively into different parts of a molecule on the rout to selective chemical catalysis by nano-junctions. (See Haertle, Volkovich, Thoss and Peskin, J. Chem. Phys. (Communication) 133, 081102-081105 (2010); Volkovich, Haertle, Thoss and Peskin, Phys. Chem. Chem. Phys. 13, 14333 (2011); Haertle, Peskin and Thoss, Phys. Status Solidi B, 1–13 (2013). 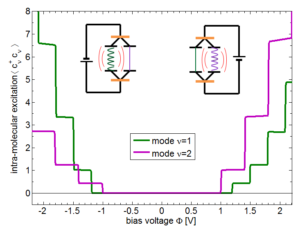 Quantum Averaging: We recently introduced a new scheme for “quantum averaging”. The quantum mechanical nature of molecular vibrations is often unrightfully disregarded in molecular dynamics simulations of complex molecular and bio systems. We formulated a novel scheme for including quantum effects in charge transport calculations in such complex systems, based on analysis of classical MD calculations. (See U. Peskin, Mol. Phys. 110, 729-734 (2012).

A. Edlund, I. Vorobeichik and U. Peskin, “High order perturbation theory for Helmholtz/Schroedinger equations via a separable preconditioner”, J. Comput. Phys. 138, 788-800 (1997).

M. Steinberg and U. Peskin, “A temperature-dependent Schroedinger equation based on a time-dependent self consistent field approximation”, J. Chem. Phys. 109, 704-710 (1998).