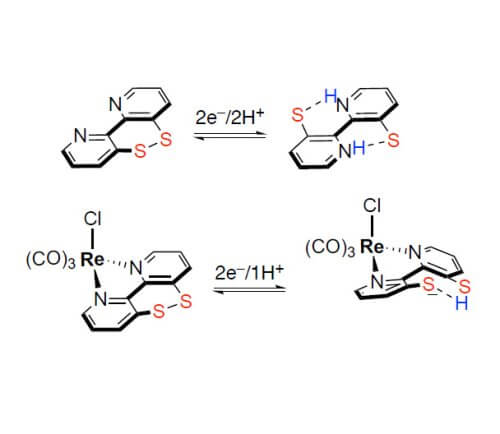 Aromatic dichalcogenides exhibits a rich reductive and oxidative redox chemistry and the one and two electron reductions and oxidations of such Ar2Ch2 species appears at rather
mild potentials. The successive 1e–-reductions often have very similar potentials as the one electron process results in the formation of an odd-electron bond, which stabilizes the radical anion, for example in hypothetical Ph2S2•− by about 30 kcal/mol.
Inspired by the natural dithiol/disulfide 2H+/2e− couple, we investigated a 2,2′-bipyridine that is equipped with a disulfide/dithiolate unit in the backbone for storing multiple electrons and protons.[2] The synchronized transfer of electrons and protons is a critical step in many chemical and biological transformations. In particular, hydride and H atom transfer reactions are important in, for example, catalytic hydrogenation or small molecule activation reactions relevant to renewable energy storage. We examined in depth the fundamental 2e–, 2e–/2H+ and 1e–/H+ reactivity of the switch depending on the metalation. It appears that the Re compound overcomes the drawback of many metal-free hydride donors, which show a large gap between the first and second reduction process, and detrimental side reactions of the radical intermediate. Furthermore, we applied such Ar2Se2 in the anodic amination and esterification of nonactivated
alkenes. Amination and esterfication reactions are of considerable importance since C–N and C–O bond motifs can be found in numerous organic compounds
associated with biological, pharmaceutical, or material scientific applications. We developed versatile protocols for the electrochemical functionalization and a detailed
kinetic and thermodynamic analysis gave valuable insights into the mechanism of the reaction as well as the impact of, e.g. solvent, additives, on the organocatalysis.