In a big step forward toward making BIO-photoelectrochemical cells (BIOcells) a mainstream clean energy source in the future, researchers from the Technion – Israel Institute of Technology and Ruhr-Universität Bochum (RUB) have overcome an efficiency hurdle by successfully combining the power of efficient light absorption by photosynthetic light-harvesting complexes with the electrochemical power of Photosystem II (PSII), nature’s water splitting enzyme. The breakthrough is a functional solution to overcoming previously limited efficiency due to a “green-light gap” in the absorption spectrum of biosolar energy devices. The findings were published in the Journal of Materials Chemistry A.

As the world strives to replace fossil fuel with clean energy sources, solar energy – because of its abundance and total lack of polluting elements – is considered a particularly valuable energy source. In nature, bacteria, algae, and plant life have evolved to efficiently convert solar energy into chemical energy via photosynthesis. BIOcells are an innovative concept in the field of renewable energy aimed at harnessing this natural process semi-artificially for the development of clean, affordable, and efficient energy sources. 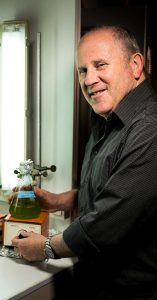 BIOcells utilize large protein complexes called photosystems, which have the capacity to convert sunlight into electrical energy. Isolated from plants, algae, or cyanobacteria, photosystems are responsible for natural sunlight to energy conversion in nature. PSII is a valuable type of photosystem because it uses water as an electron source for the generation of electricity. It is the source of all the oxygen that we breathe and all the food that we eat.

But BIOcells containing only PSII complexes only have limited efficiency. The efficiency is measured by the amount of electrical power coming out of the cell divided by the sunlight energy coming in, and PSII alone can only convert a limited range of light. They are unable to convert green light, which constitutes about 50% of visible light, into energy. In cyanobacteria and red algae, this is rectified by the Phycobilisome (PBSs) light harvesting complex. PBSs are protein structures found in cyanobacteria that enable them to harvest light that is not absorbed efficiently by the chlorophyll molecules in PSII. PBSs function as a light-absorbing transmitter, directing excitation energy into the reaction centers of PSII.

“As unique as PSII is, its efficiency is limited, because it can use merely a percentage of the sunlight,” explained Professor Marc Nowaczyk, head of the Molecular Mechanisms of Photosynthesis project group at RUB. “Cyanobacteria have solved the problem by forming special light-collecting proteins, i.e. the PBS, which also make use of this light. This cooperation works in nature, but not yet in the test tube.” Professor Noam Adir of the Schulich Faculty of Chemistry added that, “just as in nature, our two groups collaborated, bringing our expertise in isolating the PBS with Prof. Nowaczyk’s groups expertise in isolating PSII. Together we overcame the obstacles of putting it all together in the BIOcell.”

In order to make the collaboration between cyanobacteria and plant photosynthesis functional in an artificial BIOcell, the two teams succeeded in producing a two-component bioelectrode. This included the difficult task of functionally joining the PBS and PSII multiprotein complexes.  some of which were combined across species.

The researchers, led by Dr. Volker Hartmann (RUB) and Dr. Dvir Harris (Technion), stabilized the interaction between PSII and PBS by permanently fixing the proteins at a very short distance from each other using crosslinkers. Crosslinkers are molecules with two or more reactive ends that are capable of chemically attaching to specific functional groups on proteins. After crosslinking PSIIs with PBSs, the team was then able to insert the super complexes into the appropriate electrode structures. 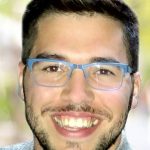 Integration of the PBS–PSII super-complexes within a hydrogel on macro-porous indium tin oxide electrodes (MP-ITO) improved the incident photon-to-electron conversion efficiencies (IPCE). IPCE values in the “green gap” were doubled compared to PSII electrodes without PBS and the IPCE in the green light gap reached a maximum of 10.9%.

The capacity to assemble these proteins is a breakthrough in biological solar cell development. This means that protein complexes from different species can be functionally combined to create semi-artificial systems that have the cumulative advantages of the different species utilized.

In their future BIOcell research, the teams will mainly focus on optimizing the production and life span of the biological components.

The research was funded by the German-Israeli research project Nano-engineered Opto-bioelectronics with Biomaterials and Bio-inspired Assemblies under the auspices of the German Research Foundation (DFG) and the Israel Science Foundation and the Ruhr Explores Solvation Resolv Cluster of Excellence (www.solvation.de) and the GRK 2341 Microbial Substrate Conversion Research School (Micon), which is financed by the DFG.

Professor Noam Adir is a member of The Nancy and Stephen Grand Technion Energy Program (GTEP), and Dr. Dvir Harris is a GTEP PhD track graduate.

Click here for the paper in Journal of Materials Chemistry A